Want to book a grab, order food online to your doorstep, make a payment online, or shop the latest clothing no longer limited in the mall,… many apps come on your mind, right? But, over the last 5 years, a new technology trend has been released – Super App!

As the name suggests, super app is all-in-one experience to access to many different services, which help you save phone space without having a lot of other apps. Users will be very loyal to an app that is easy to use, friction-free, functional, provides good services and allows for a multifaceted experience.

The super app model makes senses through many apps like WeChat, Grab, Go-Jek,… Most are becoming an essential part of life where you can order your groceries, book travel, and buy a plane ticket all in one place.

But actually what is a super app, which advantages does it have and are super apps the future? Will super app already experience a boom in many other regions?

Read also: Fintech | The Rise Of Super App In Asia

What is Super App?

The “super app” became a popular buzzword in Southeast Asia after WeChat, Grab and Gojek, the 3 biggest tech startups, began describing themselves.

Super App – Apps Within An App

To begin with, the rise of super apps is getting actively developed mostly in Asia. Super app is described all-in-one managing a consumer’s need in one place. This everyday app incorporates many functions and features, from social networking, eCommerce, to goods delivery and financial services.

Moreover, the super app allows mobile users to use the service of third-party merchants without downloading separate apps.

Just single “super app” you can easily message with friends, order food delivered, call a taxi, shop online any products or services, transfer money,… The list can go on and on. And all this is put a bunch of services together into. Super great, isn’t it?

Do We Need A Super App?

With each new extension, super apps try to get more and more attention, time and money from the user. No matter where you are, a super app is undeniably convenient and make life a bit simpler!

Some advantages of a super app:

For these reasons, there are many examples of successful case super app in the market!

In the United States, many apps such as Facebook, Messenger, Skype,.. are all existing separately. But in Southeast Asia, you can get everything you need through WeChat, Grab or GoJek,… Here is the list of popular super apps:

Besides its basic sending messages, this super chat app: WeChat can also be a commercial app that creates a lifestyle of commodification and convenience through combing multiple functions.

Once using Tencent’s super app, users can access numbers of third-party services like hailing a cab, buying movie tickets, ordering food delivery, paying utility bills, or sending money to friends. All of these are integrated and can be done in one single app!

Not a surprise that Tencent’s WeChat is used in more than two-thirds of the Chinese population! Without a doubt, WeChat has become the super app for everything in life.

Like WeChat Pay, Alipay is the payment solution affiliated with China’s e-commerce Alibaba. The new Alipay 9.0 no longer is a wallet. These stripped-down apps run within the all-in-one platform, which changes the way you shop, spend or manage your finances.

These days, Alipay wallet provides easy mobile access to purchase and pay for products and services from local restaurants, shops and other outlets, as well as to obtain discount e-coupons, and share product recommendations and red envelopes with friends, among other features.

Whether it is money transfer, recommending a restaurant, we put you at center stage in Alipay 9.0.

Grab is becoming an everything, everyday app in Southeast Asia! Not only being a leading player in shared transport space, but Grab also has taken to expand into food delivery and online payments among other services.

The Singapore’s startup recently secured funds worth USD 1.46 billion (SGD 2 billion) for its ongoing Series H round of funding from SoftBank Vision Fund in March, this year. So that, this ride-hailing brings the total amount raised in the round over US$4.5 billion.

Basically, with one swipe, you can experience anything in the consumer services sector. With more than 2.8 million drivers, Grab has introduced multiple on-demand transportations, paying bills, ordering food, and even booking hotels.

With a large suite of service, Grab – your everyday super app provides enough benefits and functionality to keep users from ever closing the app! 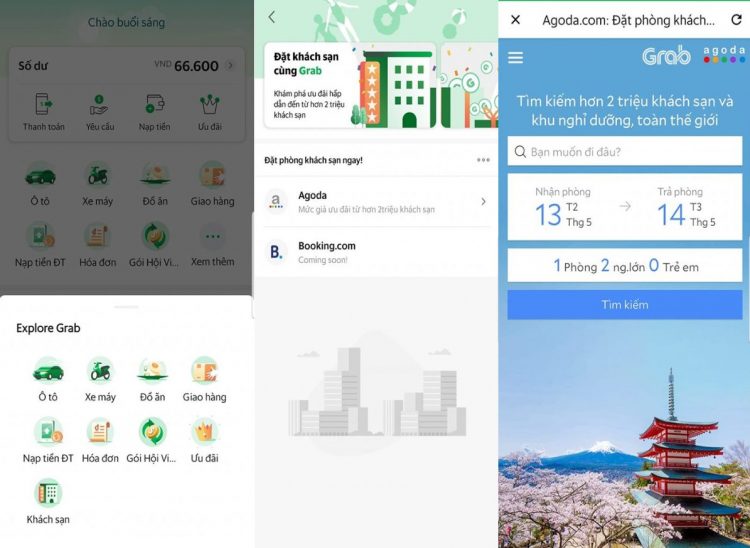 Grab is not alone in the race to become South-east Asia’s leading super app. GoJek – the most fiercer competitor, has expanded outside its Indonesia market.

On the way to become a super app, Go-Jek started operations as a motorcycle ride-hailing on mobile. Moreover, this Indonesian startup is now offering services from food delivery to fintech as well as massage services.

Today, this super app business model has grown well beyond its original range of offerings to cover services including lifestyle, entertainment, and financial needs. As expanding regionally all in one app and localizing app in each market, GoJek is different depending on where you are.

Related: How To Build Location Based App?

MoMo has made a breakthrough to the 10th most well-funded tech start-up in the Asia-Pacific region by global information services firm CBInsights.

Moreover, Vietnamese start-up Momo was recently ranked as the 36th position in the top 100 global innovative fintech, announced by H2 Ventures and KPMG.

With growing customer data, this MoMo super app partners with many big brands name in Vietnam like Lotte Mart, Circle K, Ministop, Gongcha, Koi, The Coffee House,… The MoMo app has created a super apps meets all of daily necessities through the payment!

This 10 million users’s super app promise a big step! A potential push to promote the development of the entire electronic wallet market in Vietnam in the near future.

Following on the examples of super apps, ZaloPay is a mobile payment app with many features such as transfer money, pay phone recharge and online bill payment.

After 3 years of development, the Vietnamese’s super app has become a familiar brand name in the e-wallet market! ZaloPay also has launched a new extremely convenient feature –  transfer money to friends right in the chat bar.

With these new features, ZaloPay has opportunities to reach over 100 million users using the Zalo app. As a result, Zalo joins the list of Vietnam’s super apps to gain a foothold into numerous businesses.

Related: ZaloPay And The Battle In Super App Platform In Vietnam

Moreover, AgileTech is building 02 Super Apps with huge customer ecosystems about Travel and Young adults (under 30). Promoting your mobile app will help you:

Our dedicated software development team is ready for your custom requirements. You can contact us at [email protected] or via (+84) 936 281 059 for more information. Get in touch if you want to learn more!