By Kate TaSeptember 30, 2020March 23rd, 2021One Comment
While mobile users in the world use different dedicated apps for specific tasks, users in China just need a single “super app”. Imagine an app that gives you access to an all-in-one place, ranging from communicating with friends to booking a taxi service – this is the concept of a super app.Super apps flourish in Asia-Pacific mobile users’ daily lives due to their needs. From only one platform, users can chat, order food, use ride-hailing services, book plane tickets, or pay for goods and services.For example, aside from its basic function of sending messages, WeChat’s users can also use more than 500,000 mini-apps on its platform. And AliPay – WeChat’s fiercest competition, surpassed 120,000 Mini Programs as of January 2019. Another super app, Baidu said its mini-programs have amassed 100 million monthly active users since being introduced two months ago.Southeast Asia quickly caught up with the new trend in the technology era. Grab and Gojek is racing to become the leading super apps. In the past three years, both companies have been adding more services to their apps, from delivery to digital payment.Recently in Japan,  LINE has evolved from a single-purpose chat app to the do-everything platform for everyday activities. In India, Paytm has added payments, utility payments, ticketing, financial services, and food delivery services over the past few years. As you can see, apart from China, there are many super apps in the world entering the battle. Although the blueprint of super apps comes from China, it might come out differently in other regions. So, let’s dive into the rise of the super app!

Super-apps were first developed in China, where few players well understood specific customers’ needs and benefited from a favorable context to thrive.The super app WeChat hit 1 billion monthly active users. In addition, Ant Financial’s CEO Eric Jing revealed that AliPay and its international e-wallet partners have collectively served 1.2 billion users worldwide by the end of June. These two super apps become an integral part of the Chinese mobile system. They both offer services from food delivery, ride-sharing to financial services such as payment.Now, companies around the world are trying to follow the successful Chinese model – Super app. However, could this model emerge in the US or Europe?

We are starting to see the rise of super apps in the world. But they will not follow China’s super app because of different markets. Then, each platform needs to adjust to address that demand.In the West, the services offered, at least for now, do not vary so much in terms of diversity. Chinese or Asian people seem to be less reluctant to have a provider/service imposed on them. Meanwhile, Westerners are more likely to explore several options before buying.

Due to the market size and Chinese’s behavior, super apps like WeChat, AliPay lead enormous influence. Besides, in Southeast Asia, super-app like Grab, MoMo, ZaloPay will find it difficult to achieve WeChat’s success.As the result, when producing a super app in the new market, each entrepreneur should put together a local team to understand local taste, drive operations, as well as compete with local players.

The most obvious business benefit of the super apps approach is cross-selling. Therefore, the company can offer the user various services all in one app. There are also advantages for the user because:Nevertheless, because it is a new concept, there is no language or architecture on the market ready to develop super apps.“A large business, with very different services, needs to take care not to turn the app into a monster. Excessive size is bad because older phones with less technology will not run”, he says. “Sometimes it is necessary to support different technologies and platforms. I have seen super apps where the base was in a native language and the mini-apps were in HTML5 frameworks or web views.”For the programmer, this technically hybrid approach is favorable for integrating several services. At the same time, using only the native language makes general administration potentially simpler. “It is tough to have an ideal solution” – he acknowledges.Another fundamental point, recalls Luis Lima, is that the chosen architecture allows several teams, each one responsible for a different service, to work in parallel. This can mean one squad responsible for the final app, and others building subsequent services. For him, communication and integration between these fronts is the biggest development challenge.

Western countries like the US and a predominant part of Europe are familiar with on-demand apps and smartphones. But, are they missing out on the Super app experience? The answer is no. Let’s see some thoughts below.

As more and more companies are looking up to Chinese success stories, we will probably see even more players competing to become a super app. Here are the top 5+ successful super apps examples:

Yandex Go could be Europe’s first super application combining all key aspects of on-demand transportation and delivery. The new platform will replace Yandex. Taxi app and add-on Yandex’s car-sharing service Yandex Drive. It also integrates schedules and routes of above-ground transport that were previously available in the Yandex.

Yandex Go will enable people to solve any task that involves moving around the city quickly and on time. said Daniil Shuleyko, CEO of the Yandex.Taxi group of companies.

“Our taxis arrive in less than five minutes, package or documents delivery takes 20 minutes on average, groceries get delivered within 15 minutes, and restaurant and cafe meals within 30. We leverage our technology and unite our existing Yandex platforms within a single super app to simplify everyday tasks, making multi-tasking easy for everyone”, he added.Despite the disruption delivered by the pandemic, the launch of Yandex Go is a strong sign of the global super apps’ race.

In Latin America, Rappi is one of the most prominent candidates for the super app platform. Today, Rappi is one of Latin America’s most valuable startups, worth about $3.5 billion, according to people familiar with its financials.Firstly, it started offering just food delivery. Now, Rappi provides many services such as e-scooter, payments, P2P transfer, movie tickets, and many more.It is currently possible to ask a Rappi delivery man to bring you something you forgot where you left it, to walk your dog, or to buy clothes and pay for services. Additionally, you can also see live concerts, listen to music streaming, and playing video games.

Rappi is building something that goes beyond a single category and there is no direct competitor to this, at least in this part of the world. In the end, it is intuitive to have everything in the same app as the super apps in Asia. said Sebastian Ruales, director of new business at Rappi.

Instead of having several watered apps, you find a single ecosystem with the capacity to transact, and with the last mile that arrives at the door of your house.

LINE is a chat app turned social media platform launched and dominant in Japan. While debuting as a chat app, it has become a full-fledged social media platform, as well as an integrated services provider.In fact, there is little that Line does not include. From voice calling and video conferencing, freemium games, taxi booking services, indoor maps of shopping malls, to a hub for news in Japan, music, and video streaming services, and even direct-to-user advertising.LINE as it now offers much-expanded functionality compared to this practical beginning.Read also: Super app: 5 examples of Super apps successful case

Originally, Careem is a leading ride-hailing app based in Dubai. A year ago, according to Forbes, this app made aspirations to involve in an everyday lifestyle app serving the Middle East and Africa that much more overt.Finally, after a long-awaited, the app was launched last week. Recently, Mudassir Sheikha, Careem’s co-founder, and CEO shared his thought on Twitter:For example, Careem users in Dubai can use Car, Hala Taxi, Bike, Food, Delivery, and Shops services. Meanwhile, ones in Lahore now see Transport, Delivery, and Recharge.The same goes for Career Shops. If you are in different cities, you will order different products due to its retail partners.In the post of COVID-19, he also added in the interview with CNBC: “A lot of people who would go out in the offline world and do things are now forced to do things digitally. So, fundamentally, we believe that we’re in a very strong place to come out as a digital platform to come out stronger”.

Digital payments giant Paytm has launched ‘Paytm Mini Programs’ to showcase its products and services to its user base. If you notice, it is similar to the WeChat Mini Apps Programs.

For Paytm users, it will be a seamless experience that doesn’t require any separate download and enables them to use their preferred payment option. Vijay Shekhar Sharma, Founder & CEO, Paytm said.

At the present, more than 300 app-based service providers such as Decathlon, Ola, Rapido, Netmeds, 1MG, and Domino’s Pizza have joined Paytm’s super app.What does the app offer?

Truecaller is an app that helps users avoid spam calls by identifying the callers, and also filters similar texts. In recent years, Truecaller has expanded its platform to add messaging, record phone calls, and payment services.In February this year, Truecaller had 200 million monthly active users. Additionally, it reached the 100 million daily active users milestone in April 2018.As a result, the growing story of Truecaller illustrates an interesting phase in India’s market. Many companies are seeking to develop their single app into super apps.In some ways, the battle of a super app in India promises to reprise a similar battle for dominance of the Chinese market between Jack Ma’s Alibaba and Pony Ma’s WeChat. But each country in the region has different needs. And, each platform needs to adjust to address that demand.Read also: Tata’s Super App: The Rise Of Super Apps In India

OMNi was launched in 2019 and is positioned as Central America and the Caribbean (CAC) region’s first super app. Just a year after OMNi’s launch in 2019, it has already risen the ranks to become the most downloaded app in Costa Rica’s Google Play store with 500,000 downloads.According to OMNi founder and APAC CEO Erik Cheong, OMNi focuses on four verticals: mobility, financial technology (fintech), lifestyle, and healthcare.In Central America, bike-sharing was not common. Therefore, the micro-mobility vertical served as an opportunity to “convert analog elements of regional transportation offerings into digital channels.”Besides, in the Fintech vertical, the company partnered with Coopenae Bank, the largest financial co-op in Central America and third-largest in Latin America.OMNi also signed a memorandum of understanding with one of the largest EV scooter makers in the Asia region to launch OMNiGO. The app will be the first green mobility service leveraging on EV moped sharing in Costa Rica and Singapore. This is a space that the super apps like Grab and Go-Jek have not dominated yet. 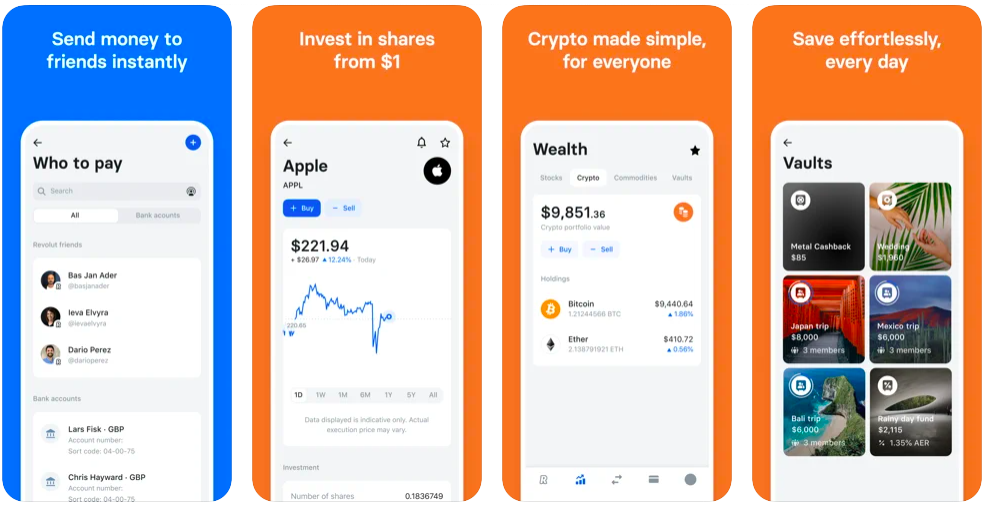 Digital banking Revolut released version 7.0, adding another step in the journey to building a financial super app. Instead of a multitude of apps for spending, saving, budgeting, and investing, what if everything could be streamlined in one place? Revolut 7.0 is here to give you exactly that. Here are some of the exciting things you can expect to see in the app very soon:

AgileTech could help you build your own Super Apps platform with:Moreover, AgileTech is building 02 Super Apps with a huge customer ecosystem of Travel and Young adults (under 30). Promoting your mobile app will help you:Our dedicated software development team is ready for your custom requirements. You can contact us at [email protected] or via (+84) 936 281 059 for more information. Get in touch if you want to learn more!

How much does Flutter app development cost in 2022: Detailed Estimation

Everything about the latest Flutter 3 update in 2022

Pros and cons of Flutter: When to use it in your project?